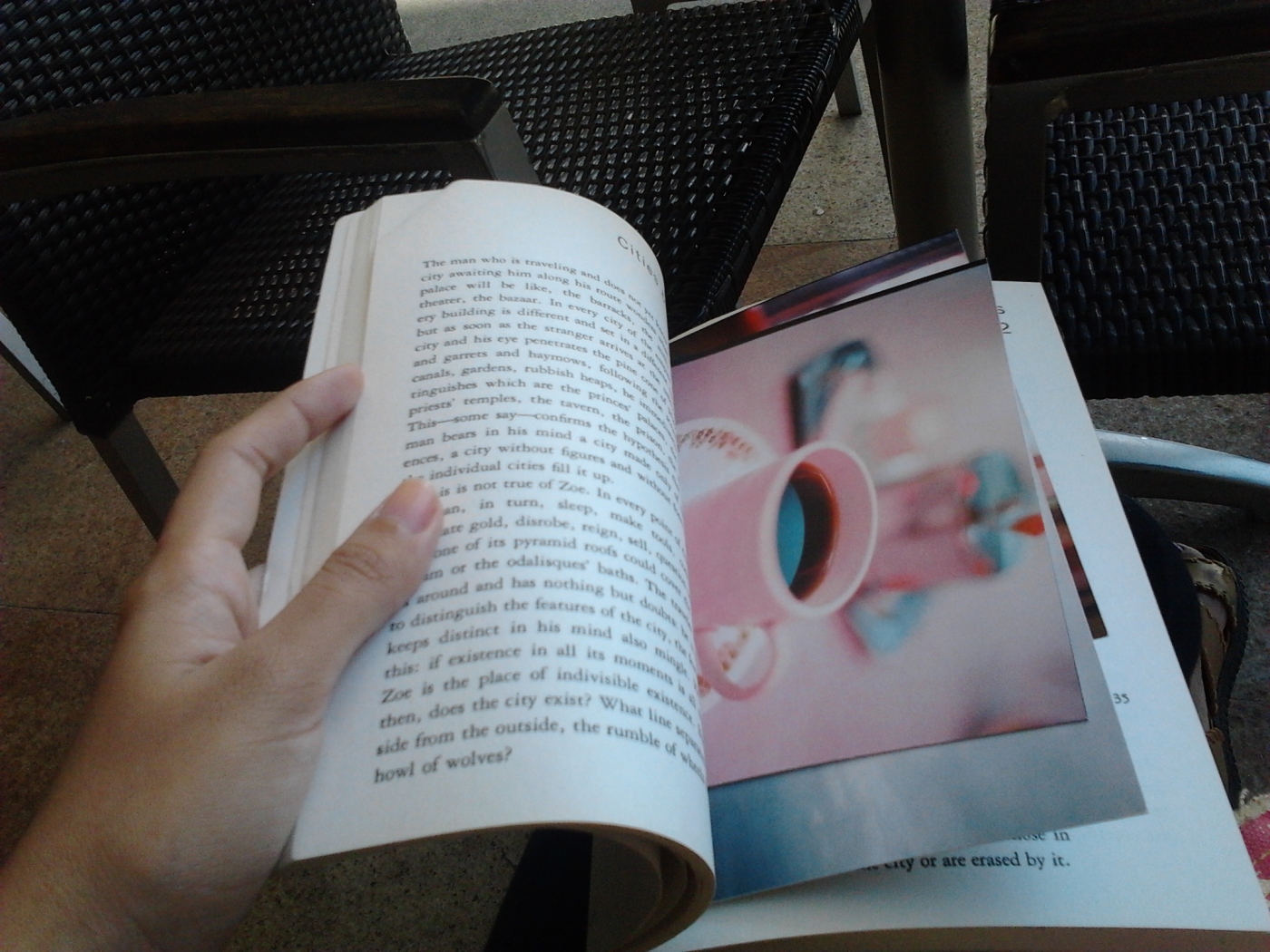 I’m spending today with my friend Akire at the studio which I mentioned in a previous post. We’re having a writing/get stuff done day and it’s going well, so far. 🙂 Here are a couple of things that I thought I would share:

I really, really like this book. I’m a little less than halfway at this point and so I’ve gotten a feel of it, for the most part. The book is basically a bunch of short descriptions of cities (invisible ones, yes) as described by Marco Polo to Kublai Khan at a time nearing the end of his (Kublai Khan’s) empire. I really like how numerous short work can come together like this–every description of ever city is extremely precise and reveals a cleverly masked truth about the heading that city is filed under (“Cities & Desire”, “Cities & Memory”).

For example, here are a few bits I really liked:

“This city which cannot be expunged from the mind is like an armature, a honeycomb in whose cells each of us can place the things he wants to remember: names of famous men, virtues, numbers, vegetable and mineral classifications, dates of battles, constellations, parts of speech. Between each idea and each point of the itinerary an affinity or a contrast can be established, serving as an immediate memory. So the world’s most learned men are those who have memorized Zora.

But in vain I set out to visit the city: forced to remain motionless and always the same, in order to be more easily remembered, Zora has languished, disintegrated, disappeared. The earth has forgotten her.” (Cities & Memory, pp.15-16)

“On the map of your entire, O Great Khan, there must be room both for the big, stone Fedora and the little Fedoras in glass globes. Not because they are all equally real, but because all are only assumptions.

The one contains what is accepted as necessary when it is not yet so; the others, what is imagined as possible and, a moment later, is no longer possible.” (Cities & Desire, pp. 32-33)

“You do not come to Euphemia only to buy and sell, but also because at night, by the fires all around the market, seated on sacks or barrels or stretched out on piles of carpets, at each word that one man says–such as “wolf”, “sister”, “hidden treasure”, “battle”, “scabies”, “lovers”–the others tell, each one, his tale of wolves, sisters, treasures, scabies, lovers, battles. And you know that in the long journey ahead of you, when to keep awake against the camel’s swaying or the junk’s rocking, you start summoning up your memories one by one, your wolf will have become another wolf, your sister a different sister, your battle other battles, on your return from Euphemia, the city where memory is traded at every solstice and at every equinox.” (Trading Cities, pp.36-37)

I haven’t gotten as far along with this as I would like. So far, I have 20 people listed down and I only have 3 works out. The difficult thing about writing something with such a specific audience in mind is that you know, more or less, what it is these people will enjoy but you aren’t sure you’ll enjoy it or you aren’t sure how to bend your style so that it accommodates what they’ll enjoy. However, I think that this is excellent practice and that it does help with diversifying the ways in which you (can, if not prefer to) write.

If things go well, I may have another work up today. If not, then all succeeding work will be put up by late next week at the earliest. :<

We’re currently working on stuff to be included in EM Zine Issue 4, coming out in February at Komikon Baguio and Elbikon. I’m both excited and exhausted–excellent (haha) alliterations, if I do say so myself.